BC Screen Production Community Shares Generously with BC Families

IATSE Local 891 President Mitch Davies was thrilled to join his counterparts from BC film industry unions and guilds to present a cheque for a staggering $87,133.50 to the Greater Vancouver Food Bank on Friday December 11, 2015. City TV was on hand to capture the moment.

The money was raised by the cast and crew from 20 productions, who together got in the spirit of friendly competition — and of giving — to raise money and food in the 2015 Reel Thanksgiving Food Bank Challenge this fall. The top five fundraising productions were:

Congratulations to every cast and crew member who helped this year’s effort exceed all expectations to ensure that more BC families benefit from such generous support. 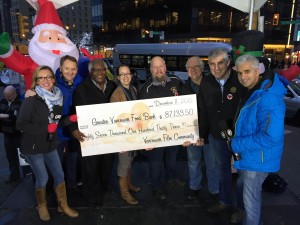 IATSE Local 891 – The Union Behind Entertainment.Located in beautiful British Columbia, with an accomplished, world-class membership of over 5,000 artists, technicians, and craftspeople, IATSE Local 891 is internationally recognized as a leading choice for film and television producers.